Wingless Films was founded by Jim Elton and Tom Menary on December 15th, 2010, following their association with the film group Eternal Silence. The name was chosen in response to the original suggestion, "Just Wing It Productions", having already been copyrighted, prompting the idea that the group had become "wingless". The first release to bear the Wingless Films name was Capsule, Part 1 on 18th February, 2011.

Prior releases from 2010 were retroactively added to the Wingless Films roster, including the cop drama Jericho; the post-apocalyptic The Walk; sci-fi dramas The Passage of Time and Bounded; and the thriller Captive. The Passage of Time is generally considered to be the (unofficial) starting point for Wingless Films' unique brand and style. The film also marks the first original soundtrack composed by Tom Menary, which would become a staple of future releases.

Continuing into 2011 with the two-part release of Capsule and the fantasy Wingless, the group expanded in several areas, most immediately in its association with the Canon 550D, replacing the JVC as the camera of choice for future Wingless Films shoots. The experimental short Fifty was the first to utilize the new camera. The group also expanded into new locations, notably drawing on the vast landscapes of Dartmoor for the vistas of Wingless and the frontier wilderness of Spirit of the Frontier. This ambitious short was intended to display Dartmoor by doubling for the Old West, and marked a collaboration with the co-founder of Imperfect Cinema, Allister Gall.

Wingless Films returned to sci-fi with Scout and Darkness, and briefly returned to their hometown of Bridgwater to shoot the thriller Chase the Dragon. The last release of 2011 was Disavowed, which again utilized the scenery of Dartmoor to tell the story of a desperate man on the run from an unseen enemy. The group also began collaborating with Metal Snare Production, which yielded the comedic two-handers Intervention and How to Lose Friends & Assassinate People in the new year. 2012 also saw the release of the emotional supernatural drama Petriarch, co-starring the Princetown-based photographer Mike Kinsey. Wingless Films also began an association with the photographer Rick Stear, who provided the locations for Petriarch and The Time Collector, and made his on-screen debut in the meditative tone poem, Sons of Moorland.

March 2012 marked the start of principal photography on They're Coming, a paranoid thriller directed by John Tomkins of Emberlense Productions, set and shot in Torquay. Jim Elton worked as Director of Photography and Editor, while Tom Menary portrayed the protagonist, David York. Wingless Films also collaborated with Plymouth filmmaker Craig Whyte on the 360-degree sci-fi short Hypersleep, and attended several shoots with Shields of Justice. The cinema premiere of They're Coming was held in Torquay in September. Returning to their own productions, the group began work on The Lite Blues, a series of short, buddy-cop episodes starring Boyd Rogers and Julian Seager, and released the tone poem Cantharsis in October as a partial sequel to and remake of 2011's Knight.

The first release of 2013 was Coming Home, a short directed by Rick Stear, who later appeared on-screen in By the Sword. The group also worked on A Dark Tale, the next production by John Tomkins, and The Red-Hooded Girl from Mark Norman's Viewfinder Films. 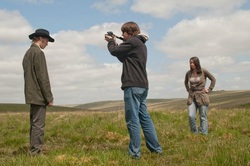 Filming on "Spirit of the Frontier". Photo by Mike Kinsey
Listed in alphabetical order. Visit the main cast and crew page here.