An Itch in Time

An unreleased short from 2011.

Ben arrives in the past.
An Itch in Time was intended to be the fourteenth Wingless Films production, following the release of Spirit of the Frontier in May 2011. Footage for several scenes was shot in Plymouth and Dartmoor, although the project was ultimately abandoned, and Sanctuary became the next short film released.

Directed and shot by Jim Elton, and starring Tom Menary, An Itch in Time was the story of an unwilling time traveller named Ben, who was thrust into the past or future whenever he sneezed, resulting in several anti-chronological meetings with his love interest, Clare. It was intended as "a slightly silly take on The Time Traveller's Wife", and also shares certain characteristics with the 2010 short, The Passage of Time, and The Time Collector from 2012, notably in terms of music. 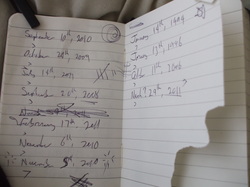 Pages from Ben's notebook.
Filming began on 7th June, 2011, with five shots completed in Dartmoor from the opening sequence in which Ben suddenly appears in the middle of nowhere and is forced to walk back home. A production outtake featuring Jim, "The Wingless Shuffle", was released following shooting. The film's title was revealed on Twitter with a photograph of the script title page.

Footage for a montage of Ben's unexpected travels was shot on 9th June around the Woodford Wood area of Plym Bridge. A third day's shooting took place on 13th June, followed by a shoot in Tom's home (doubling as Ben's) on the next day. This saw Ben discovering he had travelled back in time to the year 1999, demonstrated by finding various items of memorabilia from the then-current Star Wars Episode I: The Phantom Menace, including an item of Jar Jar Binks merchandise which shocks him enough to prompt another sneezing attack. Editing began later in the day, during which the opening sequence was assembled.

As of June 28th, principal photography had begun on Sanctuary, which became the next Wingless Films release on 3rd July, 2011. On 19th July, Tom Menary released a blog post entitled "An Itch in Time - the unreleased music", which stated the project had been cancelled. The post contained links to and commentary on twenty-six musical cues composed by Tom for the film, as well as a summary of thoughts on the project itself. 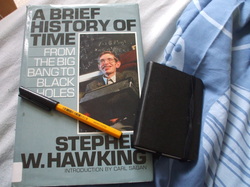 Props for the "1999" sequence.
During production, Tom Menary composed twenty-six original cues, demos and other experimental tracks intended to form part of the film's instrumental score. The soundtrack was not completed, although the existing tracks were released in July 2011 along with commentary on their origin and how they might have fitted into the finished film.

The score was constructed around "The Time Traveller's Theme" first heard in The Passage of Time, and later re-used in the 2012 short, The Time Collector. The motif was heard in the introductory sting, and throughout the first sequence. A love theme, entitled "Ben & Clare" was composed for the film, in addition to a B-theme referred to as "Traveller's Woes". The third released track ("A Menacing Phantom") included a play on motifs from "Duel of the Fates" composed by John Williams for Star Wars Episode I: The Phantom Menace, while track six ("Back and Forth") featured a variation on Ludwig van Beethoven's Piano Sonata No.8 ("Pathetique"). Tom also cited Murray Gold's scores for Doctor Who Series Five as an inspiration.

The twenty-six tracks were released on Last.fm, and alongside commentary by Tom in a blog post entitled, "An Itch in Time - the unreleased music" on 29th July, 2011. The album was later released in on Bandcamp, along with an additional theme track from September 2011. 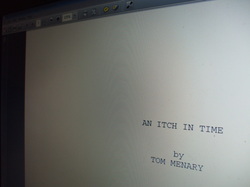 A version of the film's script.
Cast

Ben puzzling out his situation.
Wingless Films Unreleased  |  Next: Sunrise >>