Sharpitor ("Wingless").
Situated south from the Yelverton-Princetown road twelve miles from Plymouth City, Sharpitor has come to define Wingless Films' ventures on Dartmoor, and is referred to among its collaborators as "Wingless Hill". The area first appeared in the coda of 2011's Capsule, which featured the small, roadside lake at the foot of the hill as the resting place of Sam's Earth-bound message box. The hill was prominently featured in Wingless, whose protagonist climbs the tor on a call to adventure to discover his new-found powers.

Footage for the unreleased film, An Itch in Time, was shot around the area. The tor was later the setting of the single-shot film Solitude, for which Jim Elton and Tom Menary took two photosets showing the location towards sunset: "A Wingless Sunset" and "Sundown on Wingless Hill".

A photoshoot for Kate Sermon's novel, Dark Flows the River, was held on and around Sharpitor, with photography by Jim Elton. 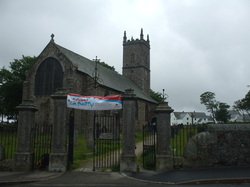 St. Michael & All Angels.
A Dartmoor town located between Yelverton and Two Bridges, Princetown is most famous as the location of Dartmoor Prison, and is the highest town on the moor. It is home to Wingless Films associate Mike Kinsey, who owns and operates the Oratory bed and breakfast used as a filming location for Petriarch.

One of Princetown's key locations is the Anglican Church of St Michael, also known as St. Michael & All Angels, from which was derived the title of Wingless Films' 2011 documentary, All Angels, in association with the Churches Conservation Trust. The documentary was filmed in and around the church, and spotlighted the building's history in talking heads with Mike Kinsey and Trust representative Thomasin Westcott. Built by prisoners of the Napoleonic Wars between 1810 and 1814, some of the church's history was used as the background for the 2011 film, Sanctuary, which likewise featured the location with permission from the Trust.