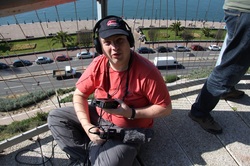 Julian during filming of "They're Coming" (2012).
Julian Kemp is an independent film maker based in Didworthy, Devon, and is the director of the film and production group, Diddy Films. He has worked on a number of local film projects, including the 2012 thriller They're Coming, starring Tom Menary with Jim Elton as Director of Photography. Kemp served as sound recorder and boom operator, and provided additional expertise during post-production.

Because of his work on They're Coming, Tom and Jim recruited him to work on sound for The Lite Blues series and Resurgence. Kemp has recently enjoyed success with his documentary The Sanatorium, exploring the history of the Didworthy Sanatorium for Consumptives, and provided sound recording and editing for A Dark Tale and The Red-Hooded Girl in 2013. 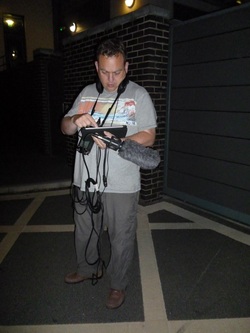 Julian during pick-ups for "They're Coming".