The locations across Plymouth, Dartmoor and South West England used for the production of Wingless Films past and present. 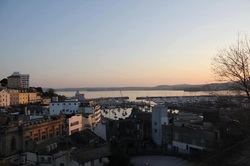 Torquay Harbour.
A seaside town in Torbay, Torquay is the third largest settlement in Devon, and is home to several Wingless Films associates. It is primarily notable as the setting and filming location of the 2012 thriller, They're Coming, co-directed by Jim Elton and starring Tom Menary.

Wingless Films first began its association with the town by appearing on The Movie Show on Torbay FM, hosted by John Tomkins and Sean Wilson. In December 2011, Tom was cast as David York in Tomkins' They're Coming, and filming began in Torquay on 24th March, 2012. A number of locations were utilised, including Rock Walk, the town seafront and Dot's Pantry, also home to Torbay FM. The film premiered at the Torquay Central Cinema on 27th September, 2012, attended by cast and crew.

Wingless Films used Torbay as the setting for their web series, The Lite Blues, situating the first episode, "The Slow Method", in and around Dot's Pantry.

Lee Moor landscape ("Scout").
Located in the Shaugh Prior area of Devon, Lee Moor is home to several china clay quarries, and was used as the landscape of the alien worlds in Scout and Exile. The location was suggested to Wingless Films by photographer Liam Docherty, who accompanied Jim Elton and Tom Menary on a recce to the area during pre-production on Scout. Several desolate landscapes were captured for the film, including a scene of the scout's vessel crash-landing over the horizon of an isolated field. The character's dialogue with his orbiting superior was filmed at a standing stone on the route to Plymouth.

The area close to a series of connected clay quarries was later used for the final scene of the 2012 film Exile. It was during this shoot that Jim and Tom first met photographer Rick Stear, who captured snapshots of the filming in progress.

Rhode Lane field ("Chase the Dragon").
A market town and civil parish in the Sedgemoor District of Somerset, Bridgwater is the hometown of both Jim Elton and Tom Menary, and is their secondary permanent residence after the city of Plymouth.

The two first met while attending Bridgwater College, and collaborated with Sean McArthur and Kain Derrick as the independent film group Eternal Silence, with several early films and sketches shot in Bridgwater. Wingless Films grew out of Eternal Silence after Jim and Tom relocated to Plymouth, and their hometown made its debut in a Wingless Films production in the 2011 short, Chase the Dragon. Scenes in the protagonist's kitchen were filmed in Jim's home, and part of the hallucination, in which he runs through a seemingly endless field, was shot in a field off Rhode Lane, continuing from footage shot in the Quantocks.

Additionally, Tom's voiceover for Darkness was recorded in Bridgwater around the same period.