Roland Levinsky Building ("Straw Man").
Wingless Films began at Plymouth University, with early films such as Jericho and The Passage of Time making use of its locations and facilities.

A large number of films, ranging from Bounded in 2010 to 2012's Exile and Intervention, contain footage shot in Scott Building, the hub for Media Arts, Photography and Contemporary Film students. Jim Elton previously worked in the building's Media Hub, alongside collaborator Robin Manford. The green screen studio has been used for effects work on several projects including Bounded, Capsule and Craig Whyte's 2012 film Hypersleep, and was used as the setting for Intervention. Sound recording has been conducted in the building's sound booths; the voice-over for Sons of Moorland is an example.

Editing on all Wingless Films was conducted using Scott Building's computer facilities, and certain elements of original scores were composed in the vicinity. 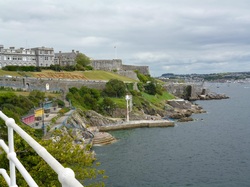 The Hoe Foreshore.
The large, south-facing coastal area of Plymouth looks out across the Sound towards Drake's Island and Mount Edgcumbe in Cornwall. The Hoe features Smeaton's Tower, the lighthouse overlooking Tinside Pool. The area is known for its panoramic views, and has been glimpsed in many films, including Wingless Films productions.

The Hoe area was first used for elements of Jericho, notably as the backdrop to a footchase ending at a three-tier belvedere built, coincidentally, over the site of a camera obscura in 1891.

The Yard ("The Guardsman").
Located in the Stonehouse suburb of Plymouth, the Royal William Yard is a former victualling yard for the Royal Navy, and is connected with the Devonport Dockyard. In recent years it has undergone several renovations, and is a popular tourist spot with views across Firestone Bay.

The Yard serves as the setting for The Guardsman (2013), and was previously used as the location for a photoshoot with Tom Menary and Megan Kerry, by Rick Stear.

Jennycliff shoreline ("Camera Obscura").
A county wildlife site covering 11.3ha of the Plymouth coastal area, Jennycliff includes beaches, coastal paths and areas such as Batten Bay. The area was used in early film projects by Jim Elton and Tom Menary, such as the unreleased Old Guys in February 2010.

It appears as the backdrop to several scenes in The Walk, and for Attention. The Bovisand area has appeared in several works, including the scene where the assassin is targeted in Captive, and for the entirety of the short Fifty. The bay appears in Camera Obscura, and more recently Batten Bay was used as the location for Desert of Two Devils.

Ernesettle archway ("Petriarch").
A self-contained satellite suburb of north-western Plymouth, Ernesettle is situated beside the River Tamar close to Brunel's Royal Albert Railway Bridge. A field off Rochford Crescent served as a primary location in the 2012 film, Petriarch, featuring the titular archway itself, the remnant of a former manor house. The location was suggested by Rick Stear, and filming took place on 28th February, 2012. The archway, formerly part of a larger structure, has since suffered disrepair.