There was a man in the sun. And he walked away.... 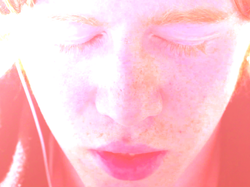 Pre-viz shot using footage from "Straw Man".
Sunrise, also referred to as The Star Child, was devised as the eighteenth project by Wingless Films, and the first multi-episode series, in August 2011. The story centered on Aden, who receives the news of his father's death at the same time as a mysterious entity known as the Star Child is born in the heart of the sun. Aden goes on a journey in which he discovers his heritage as the progeny of a Sun God, and is asked to bear his late father's mantle as the omnipotent protector of Earth, before his wrathful brother can assume the role.

The 2011 short Darkness was intended as a prelude to the series, introducing ideas such as the "man in the sun" and storylines relating to the father figure. However, the following production was Chase the Dragon, and Sunrise was ultimately deemed as a cancelled project.

Greenscreen test shot.
The concept of Sunrise dates back to at least June 2011, with a rough treatment of the series' first two episodes written on 26th June. It introduced the concept of the father's death and the birth of the Star Child, as well as a crone-like woman with whom Aden is forced to barter to reach his father. A second draft a month later introduced Heather as Aden's partner, and featured dialogue between Aden and his late father, and the Star Child upon his arrival on Earth. A complete script draft was written on 2nd August, detailing Aden's fate after becoming the new Sun God.

The first effects test took place on 27th July, showing a hand holding an open flame. The series title was decided as of 4th August, and storyboards for the first episode were created on 12th August. A rough, pre-visualization version of the opening sequence was completed on 10th September, and test footage was taken at Plymouth University's greenscreen studio during filming for Darkness. The project was hinted via Twitter on 5th September, and Darkness was released as the series' prelude on 16th September.

Ultimately, the series was cancelled with no principal footage shot, and was superseded by productions such as Chase the Dragon and Camera Obscura in September and October of 2011. 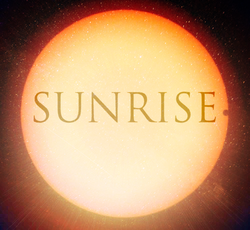 Series' teaser.
The original music score to Sunrise was intended to be composed by Tom Menary, who produced around fifty-four demo tracks for the project. Composition began on 14th July, 2011, with proposals for the "Birth of the Son" sequence, which would have seen the story move from Earth to the Star Child's appearance in the heart of the sun.

"Heather's Theme" was one of the first motifs composed, appearing in a track from 26th July. The main theme (known as the "Sunrise" or "Star Child" theme) was created on 30th July, along with further versions of "Heather" and a B-theme. "Brothers", a theme for the familial connection between Aden and the Star Child, was composed on 7th August. "The Father's Theme", also known as "Father's Lament", was composed on 21st August.

"Sunrise" and "The Father's Lament" had their debut in Darkness, played during appropriate passages of the film's narration. The remainder of the music composed for Sunrise has not currently been used in a project. An album of thirty-four tracks from the project was released to Bandcamp on 12th November, 2012. 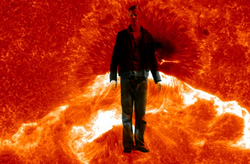