The 2012 Ident
For our complete filmography, go to the Wingless Films channel on YouTube. 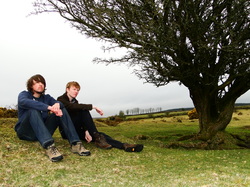 Jim and Tom during filming of "Sons of Moorland".
December