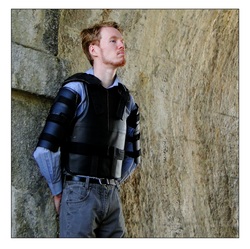 Photo by Rick Stear.
The Guardsman is the thirty-eighth production from Wingless Films. Directed by Jim Elton and starring Tom Menary with James Cotter, the film follows a guardsman at the Royal William Yard in Plymouth, who suffers a minor injury that comes to impair his moral judgement.

The script, written by Tom from a concept by Jim, was completed on 29th July, 2013, and the first day's filming at Royal William Yard took place on 6th August. Footage included shots of Tom as the Guardsman patrolling the Yard, and receiving his injury. Production was accompanied by members of the Stear family; Rick took location photographs, and Debby briefly appeared in a cameo role as a passer-by asking the Guardsman for directions. Tom released several production stills shortly afterwards.

A second shoot took place on the night of 19th August, for the climactic sequence in which the Guardsman attacks a drunk man (James Cotter). Wingless Films had previously worked with James in John Tomkins' They're Coming (which also features a scene between Tom and a drunk character played by James) and A Dark Tale. The make-up for the character's facial wounds was administered by Alex "Lexi" Gilbert.

Music for the film was composed by Tom. Scoring for the first half took place on 17th and 18th of August, and the film was released on 8th October, 2013. 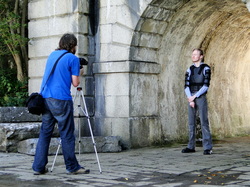 Jim and Tom during filming. Photo by Rick Stear.
Cast