Where do you go?

Solitude is the twenty-ninth short production from Wingless Films. It was shot by Jim Elton on Sharpitor Hill in Dartmoor on the evening of 25th May, 2012. The film is comprised of a single shot of Tom Menary, sitting on the edge of the hill, and was intended to provide the impetus for viewers to respond to the question of "where do you go" to attain solitude. It was uploaded to the Wingless Films YouTube channel on 14th June, 2012, and released via the Facebook page on the same day. The music was composed by Tom Menary, and based on a track titled "Oratory" from his Dartmoor album. Both the film cue and an extended track were released alongside the film, and hosted on Tom's Bandcamp profile.

Two photo sets were created using photos taken during the shoot: "A Wingless Sunset" by Jim Elton, and "Sundown on Wingless Hill" by Tom Menary. The former contains a shot similar to that used in Solitude, featuring Tom sitting on the edge of Sharpitor Hill (lower right). 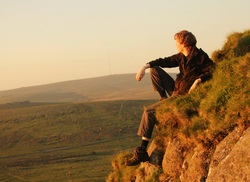 A similar shot from the "Wingless Sunset" photo set.