Death. A natural part of life. Natural as in, it will happen one day. How you get there is another story.

Afterdeath is a 2012 short film from Metal Snare Production, made in association with Wingless Films. Written and directed by Bill Sheikh, with camerawork by Jim Elton, the film stars Tom Menary as Ali, a man who is confronted by his own mortality. Running to the aid of his ex-wife Maria (Sophie Neville) during a mugging, Ali is fatally wounded, and comes to terms with the experience inside his own mental landscape.

The film was cast by 13th November, 2011, and exterior scenes were filmed in Dartmoor prior to Christmas. Filming on the scenes set in Ali's mind took place on 2nd January, 2012. Special effects work was carried out by Bill, and original music was provided by Tom. Afterdeath was released on 6th February, 2012; the same day as Intervention and Metal Snare Production's documentary short, Robin Manford: Master of the Universe, which also featured an original score by Tom. 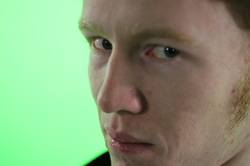