When you're on the run, the only certainty is that you'll run until you're caught. The question is, who has been following you?

Travis evades capture
Exile is the twenty-third short production from Wingless Films, and was released on 15th January, 2012. A science-fiction film directed by Jim Elton, it stars Tom Menary as the criminal Travis Fletchley Jones in his attempts to evade justice.

Filming for Exile began on 9th January, 2012 with a shoot at Plymouth University, followed by a location shoot at Lee Moor on 11th January. The shoot marked Wingless Films' first meeting with photographer Rick Stear, who provided location photos, and would go on to do so for several other productions. The special effect showing the shadow of the Executors' spaceship passing across Travis's face was created by Bill Sheikh of Metal Snare Production, who would later star in Intervention.

Scoring took place on 12th January. The film's title was also revealed. Editing was completed on 15th January, and the film was released on the same day. It marked the debut of a new Ident for Wingless Films, appearing at the start of the short.

The original score for Exile was composed by Tom Menary. The soundtrack features a theme for the Executors, serving as the film's main theme, and initially introduced over the Ident (appearing as track one, "On the Run", on the digital album). It appears towards the end of tracks two and three, and throughout the credits. The end credits music utilizes a variant of the bass notes to "Saying Goodbye" from Metal Snare Production's Afterdeath, and was originally intended as the opening cue. The soundtrack was released as a six-track digital album on 16th January, featuring five score cues and one additional, unused track ("Beast of Execution").

Exile was shown as part of The Red-Hooded Girl premiere night at Exeter University on 27th July, 2013, hosted by Mark Norman of Viewfinder Films. By the Sword and A Dark Tale were also screened. 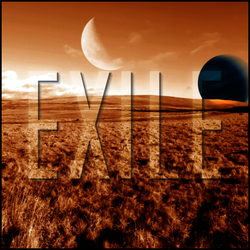