A darkened room. An interrogator, and a victim. An intervention.

The interrogator
Intervention is the twenty-third short production from Wingless Films. Shot by Jim Elton at Plymouth University on 2nd February, 2012, the film stars Tom Menary and Bill Sheikh as friends who develop a rivalry, and become involved in an intervention to resolve their issue.

Intervention was conceived by Jim Elton and Tom as an alternative and subversive take on typical intervention narratives involving drugs and alcohol. The script was completed on 23rd January, and filming with Bill Sheikh (of Metal Snare Production) took place in the greenscreen studio of Plymouth University on 2nd February. The footage was shot in monochrome, and the Wingless Films Ident, introduced in Exile, was altered to match for the film's release.

The finished film was released on 6th February, alongside two Metal Snare Production projects, Afterdeath and Robin Manford: Master of the Universe, which feature both Tom and Jim in cast and crew capacities. The original score for Intervention was released on the same day as the film. It features "No More Chairs", the film's main theme, among four score cues and five bonus tracks. The theme track was used to underscore sections of the outtake reel, while the last track is the interrogator's ringtone heard towards the end of the film—and is an 8-bit version of the "No More Chairs" theme.

The outtake reel, featuring alternate takes, flubbed lines and other bloopers was released on 7th February, and is, ironically, longer than the film itself. The outtakes can be viewed here. 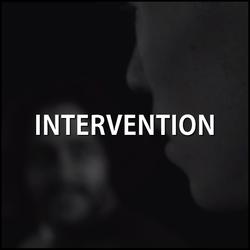