There's nothing better than coming home.

Coming Home is the thirty-fourth short production from Wingless Films, and is the first film directed by Rick Stear. Starring Jim Elton as a soldier returning home to his partner (Annie Knight), the film was conceived and shot by Rick, with footage captured in Dartmoor. The short was edited by Jim and Tom Menary, who also provided original music.

Filming was conducted on January 13th, 2013, in Dartmoor, and a final edit of the film was completed on January 28th. The soundtrack, featuring the film's score cue and three bonus tracks, was released on the same day. Two of the additional tracks include variations on the "Journey Theme" first heard in the 2012 short, Petriarch. The film itself was released on February 2nd, 2013. 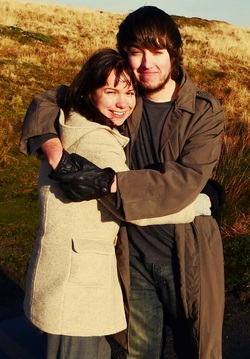 Annie and Jim on location.
Cast