A group of students sneak into a darkened building armed with torches and cameras, looking for ghosts... what could possibly go wrong? 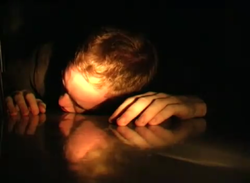 Possession is a short film originally released by Eternal Silence, and later incorporated as the third film in Wingless Films' back catalogue. Filmed by Jim Elton and Tom Menary, it follows a group of four students, played by Jim, Tom, Annie Knight and María Muñoz Acosta, as they explore a darkened building as part of an amateur, documented ghost hunt.

The film was shot on location in the Scott Building of Plymouth University, with a two-camera set-up. It was released as part of the Eternal Silence group on 7th October, 2010, and was added to the Wingless Films filmography on 15th December, 2010.

Possession was intended to tie into other films as part of a planned story arc. The rivalry between the two male characters was to have led into the events of Bounded, where an abducted man is tormented by a rival. Lines such as "You're only doing this to impress her" were intended to hint at the rival's motivation, as he is seen with the captive's girlfriend at the end of Bounded.