When the future starts sending you warnings, maybe it's time to change your fate... before the Collector comes to call.

The Collector sends a message.
The Time Collector is the twenty-eighth short film from Wingless Films, and the third to feature Jim Elton in a starring role (following Possession and Bounded). He plays the Collector, a hitman who sends death threats back through time, showing his marks their future murder at his hands. The film also stars Tom Menary as the Collector's latest target, Robert Bellever, and was co-directed by the pair.

The concept behind The Time Collector was inspired by the storyline of the then-upcoming feature film Looper, which involves assassins utilizing time travel to eliminate their targets. The script was written on 3rd May, 2012, and filming began on the 8th. The first scene shot was the Collector's message, filmed by Jim on iPhone near Burrator in Dartmoor. The surname of Tom's character, Bellever, was in homage to an area of Dartmoor. Rick Stear scouted the site and took location photographs during the shoot.

The remaining scenes, shot in Plymouth, were completed on 14th May, with editing beginning the following day. Tom composed the film's score on 16th May. With editing completed on the 17th, the film was released first to Wingless Films' followers on Twitter, before its official release on 27th May, alongside the original soundtrack. The score features a reprise of "The Time Traveller's Theme", first heard in 2010's The Passage of Time (and intended for the cancelled short, An Itch in Time), as well as a theme for the character of the Collector. 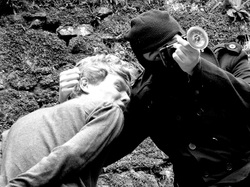