"There's no address. No face. No ID. It's not even his real name. We're chasing the invisible man." 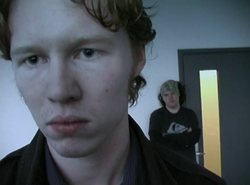 Jericho is a short production originally released by Eternal Silence, and edited in the style of an extended cinematic trailer. The film, inspired by the works of Michael Mann, is a crime drama and psychological thriller directed by Jim Elton, and stars Tom Menary as Detective Tony Mosa and his criminal alter-ego, Jericho. It also features performances from Kain Derrick and Sean McArthur of Eternal Silence, and Annie Knight.

The characters and situations were based on those of a short crime drama created by Eternal Silence, called Jackson & Valentine, for an earlier college project. The script, started in September 2009, went through several drafts, and was originally intended to be a full film, before constraints forced it to be adapted into a trailer. Early iterations expanded the roles of Jericho and Suki, featuring several scenes of them together, and focused more on the partnership between Tony and Vincent.

Jericho contains several references to the work of Michael Mann; Vincent is named for Vincent Hanna (a name appearing in both L.A. Takedown and Heat), as well as Tom Cruise's character Vincent in Collateral. There is a reference to a "McCauley Street", which shares its name with the character Neil McCauley in Heat; the stark blue colour palette of the scenes in Jericho's office are a direct allusion to the blue-tinted style of Heat, notably the scene in McCauley's apartment. Footage from this scene was used for the "AV Matter" coursework video that accompanied the film.

Filming was conducted in March and April of 2010 in various locations around the city of Plymouth. The opening chase was centred around the Hoe and Barbican area, while scenes of Jericho's office were shot in the Roland Levinsky Building on the Plymouth University campus. The soundtrack was created using various public domain tracks from Looperman.com, including a cover version of Clint Mansell's "Lux Æterna" from Requiem for a Dream. 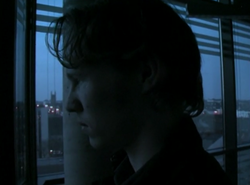 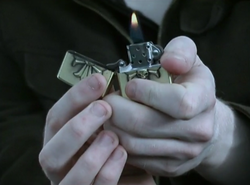