Producer-director and founder of Emberlense Productions.

John during production of "They're Coming".
John Tomkins is a film maker, producer and radio presenter in Torquay, Devon. He started out as a lyric and songwriter, and progressed to filming experimental music videos, such as Caged Rat. Tomkins began work on an ambitious, no-budget fantasy feature film, Like An Angel, which featured a difficult production capped by a fire in John's flat. The incident caused him to re-evaluate his plan as a film maker, and completed the production as a forty-five minute film.

John hosted The Movie Show on Torbay FM alongside film critic and radio personality Sean Wilson until its retooling in October 2012 into Movie Lines, hosted solely by John. His radio work brought him into contact with a number of local film makers, including Jim Elton and Tom Menary of Wingless Films, as well as collaborators including David Burbury.

In December 2011, John cast Tom as David York, the protagonist of his planned second feature film, They're Coming, and recruited Jim to serve as Director of Photography soon after. Principal photography took place in March and April of 2012, with pick-ups shot in August, towards the end of editing. The film had its premiere at the Torquay Central Cinema on 27th September, 2012, attended by cast and crew and introduced by Tomkins.

John assisted on production of "The Slow Method" in the capacity of location manager. He is currently working on A Dark Tale, a short film starring James Cotter and Tom Menary. 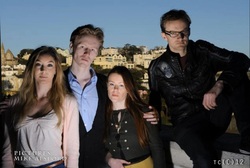 John and the cast of "They're Coming".